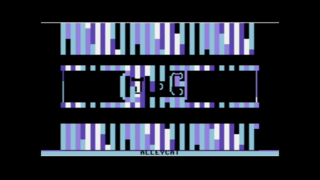 upd (2022 05 25) the video and screenshot are updated to v0.02
upd (2022 05 23) it still has spare bytes but ... actually i wonder what the but is after going from i know what an opcode is and i watched a lot of demos to i have stable colored rasterlines in 1024b in 5 days - but i dont wanna sound like that, 1st of all im not and second i hate bright lights
it would be great if someone could pack it and say like HEY you have 600 bytes not 60 left but you know, im not a crew, im just
Janes Onderground, just like "the boys" i can seriously recommend the series,
for now , this should be considered unfinished since, after cleaning, we were left with like 860bytes so the rest is filled with zerobytes, we never poked a sid before so we wont apologize for not sounding like Dane in his primal wild years ... so it should be - add something, (we can always add a string after "alleycat" lol, thats at least ten bytes OR pack it down to 512, but thats not really our dada, however, if someone has a spiritual calling and OCD that makes it so this is unbearable, technically speaking the sourcecode is right there since its, technically speaking, machine code (lol) so have a go, if you do please mail the disk back we will put your name here in a place so the tumbleweeds can read it. (stamps will not be returned , if you think thats lol you must be an old guy HAHAH)
the very first actual assembler program since we got back into the phase64. May 2022, going from "i know what an opcode is" to this in 5 days pretty much convinced us we are not braindead yet but stuck in a hole. reinforced AGAIN. Nothing fancy but give us another 30 years of scene and well go after fairl33t and brozai.
yass indeed, zipfiles (or something) containing the uncut spaghetti will be included somewhere in the future, we DID on linux but since vicelinux REFUSES to keep a stable rate we HAD TO do windows so its CBMprg syntax (for this, maybe later something else, no idea, there is no plan actually ...) but as for the "main" site the 256-512b / 1k / 4k php code loaders or phaser (which you can already right click) or appgamekit dark basic as well but we thought wed do that when we consider the site presentable. theres very likely not gonna be any GIT (not just because thats crotter and crotter cost us dear data and contacts and is in general REALLY bad for the economy since its not a monopoly when its 4000 companies but it sure pays the presidents campaign wages and ... see politics, once you open up they always try to get in between) so ... definitely not for the actual tyrnannoght game (i mean did blizzard EVER, even before crotter bought them for a small 70 billion (which no one cared about b/c musk bought twitter with half the users blizzard has for about half of that) and ... see there they are AGAIN - but if the cRPG gets off the ground then maybe, though the .d64 files will always be here - but were not really much teamplay people anymore ... nosferatu is probably closer - midians as they say, at dawn they sleep and what not and see ? this has nothing to do with the - we dont wanna call it a prod either ... .. "PROGRAM!" looks like the page might need 512b of php to make items sortable

the logos have not been 64-ified on this page - mea culpa filedating added i see - the link clicks to the .d64 file directly, filedate on this page is "last edited(the itemcontent)", the .d64 page has the dates on the actual .d64 files - php oneliners is l33t, dont make it strict, lady, leave that a choice plz.
ZeroDesign doesnt design, that requires thinking and thinking is hard, these things fall in place over time ... we wont be making excuses or apologizing either ... this page has 255 bytes of php code in it, it will show better with more items :) str_contains is l33T ! if you dont know what that means then wordpress is your enemy